The husband of Vice President Kamala Harris‘s newly appointed top advisor is embroiled in a bribery and corruption scandal that could bankrupt Sin City.

Clark County Commissioner Justin Jones, 47, was a lawyer for an environmental group when, in 2018, he allegedly entered an ‘illicit and corrupt deal’ with Nevada‘s Democratic Governor Steve Sisolak, killing a property developer’s plans for a high-density residential development on 2,400 acres near Red Rock Canyon National Conservation Area.

Under his company, Gypsum Resources, and backed by his creditors, developer Jim Rhodes is now suing the county and its board of commissioners for damages that, he claims, run to more than $1billion.

If successful, the settlement could wipe out the $1.5billion budget of the Nevada county which is home to Las Vegas and its world-famous Strip. 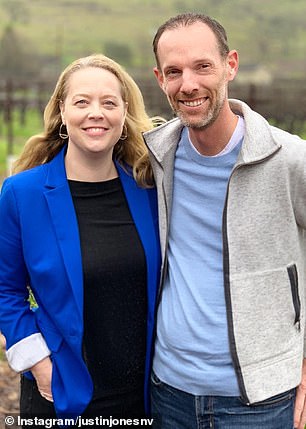 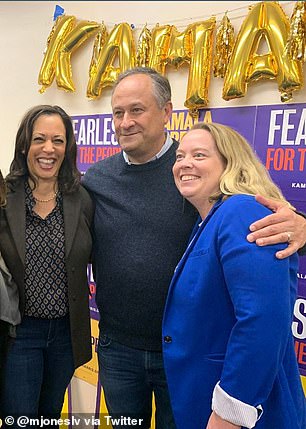 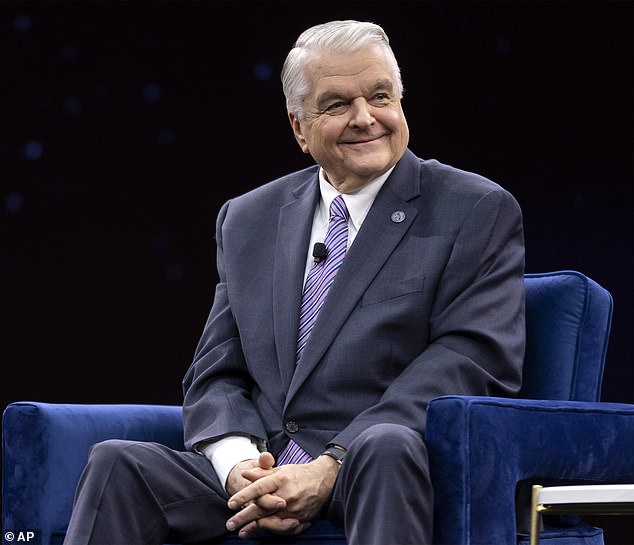 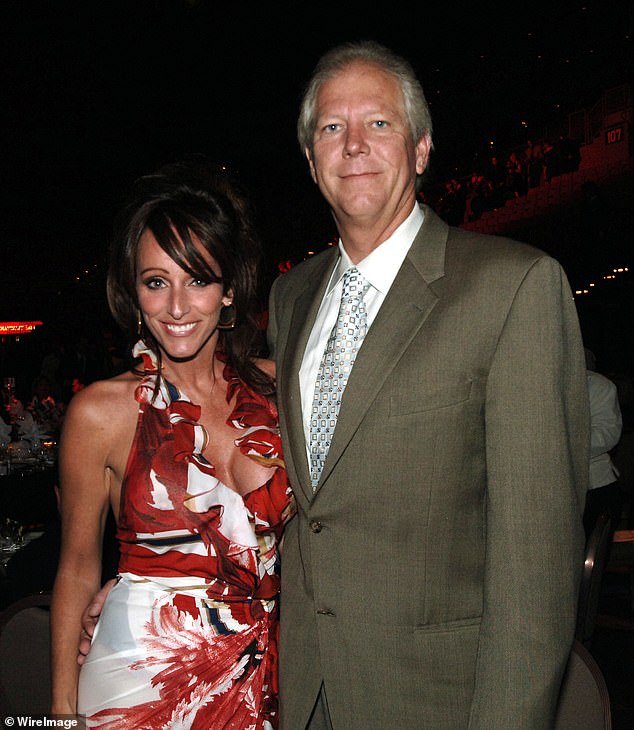 Jones’s wife Megan Jones was appointed Special Assistant to the President and Director of Public Engagement at the Office of the Vice President last month, according to her LinkedIn page. She had worked closely alongside former Senate Majority Leader Harry Reid for more than 20 years before his death in December last year.

Among the accusations against Jones is that he deleted emails – including many to his wife – as he tried to cover his tracks.

Rhodes, a well-known developer in Vegas, claims he is the victim of a crime and that Justin Jones and Sisolak’s ‘shocking and grotesque violations of the law and Gypsum’s rights,’ have left his land worthless and him bankrupt.

In court records obtained by DailyMail.com, Jones is accused of trading his powerful public support for Sisolak, then commission chair and a Democratic candidate for governor, and promising to dismiss an ‘uncomfortable lawsuit’ being brought by ‘Save Red Rock,’ the conservationist group of which he was legal counsel.

In return Jones demanded Sisolak’s commitment to vote ‘no’ on Gypsum’s plans and delay a key vote until Jones himself was in office.

At the time Jones was running for a seat on the commission and expected to win. The environmental lawyer had campaigned on the promise that he would nix Rhodes’s plans in his first 100 days in office.

According to the lawsuit now being brought by Rhodes, Jones and Sisolak’s deal amounted to a legal quid pro quo – trading a thing of value (Jones’s campaign support and the dismissal of the lawsuit) in return for an official action (Sisolak opposing the land-use vote and kicking the vote down the road.)

Once instated as commissioner, the suit continues, Jones failed to recuse himself and misled the ethics commission about the extent of his interests in derailing Rhodes’s plans so that he could vote against the developer’s application. 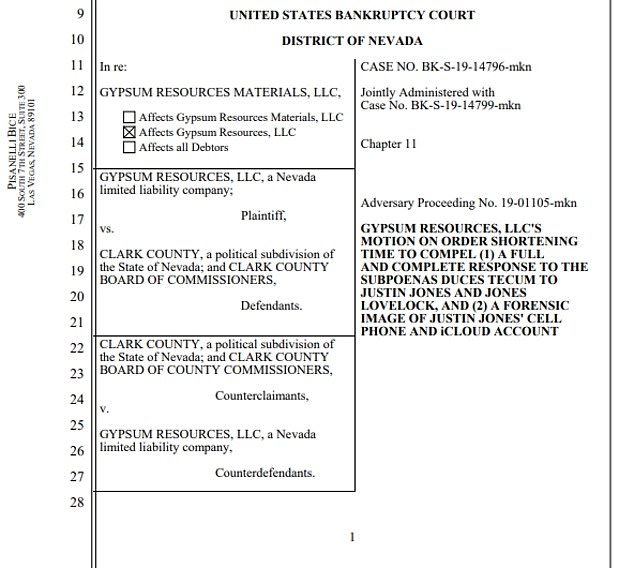 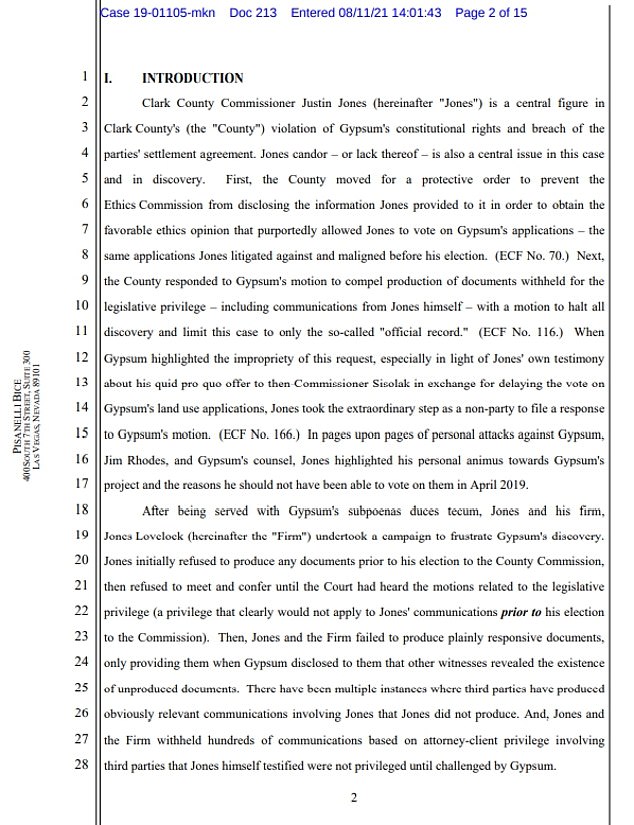 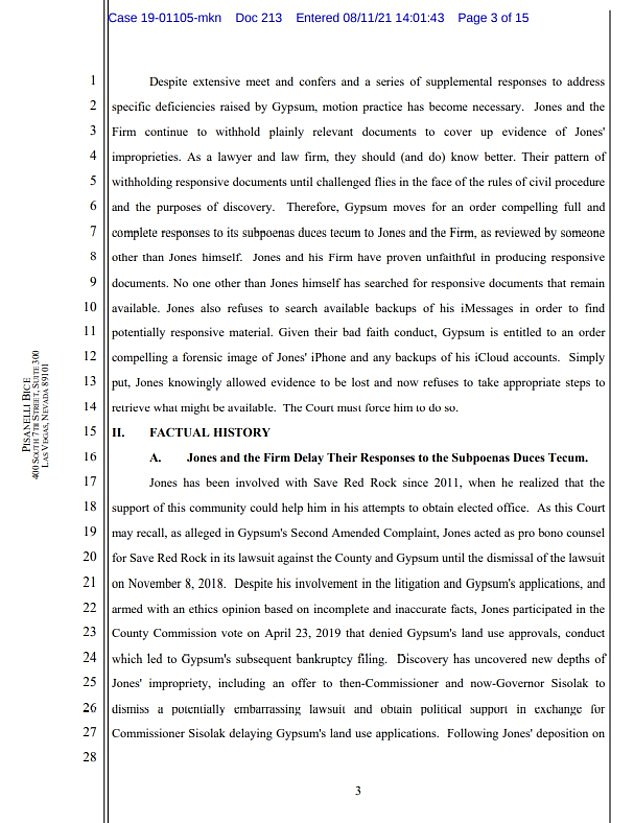 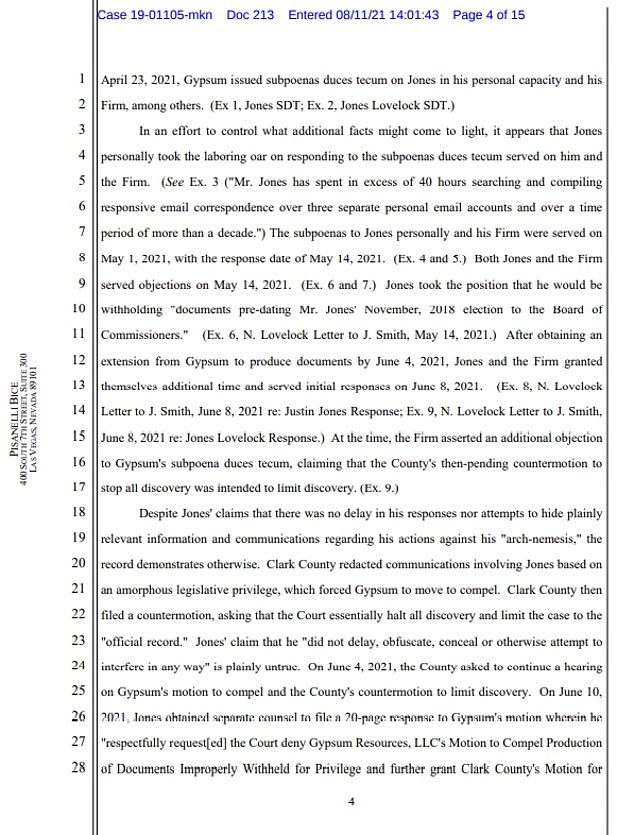 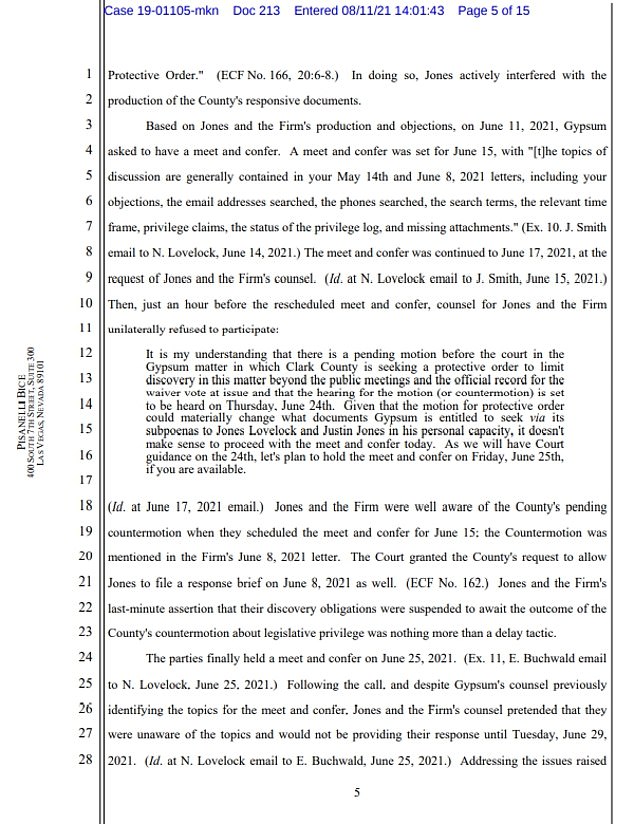 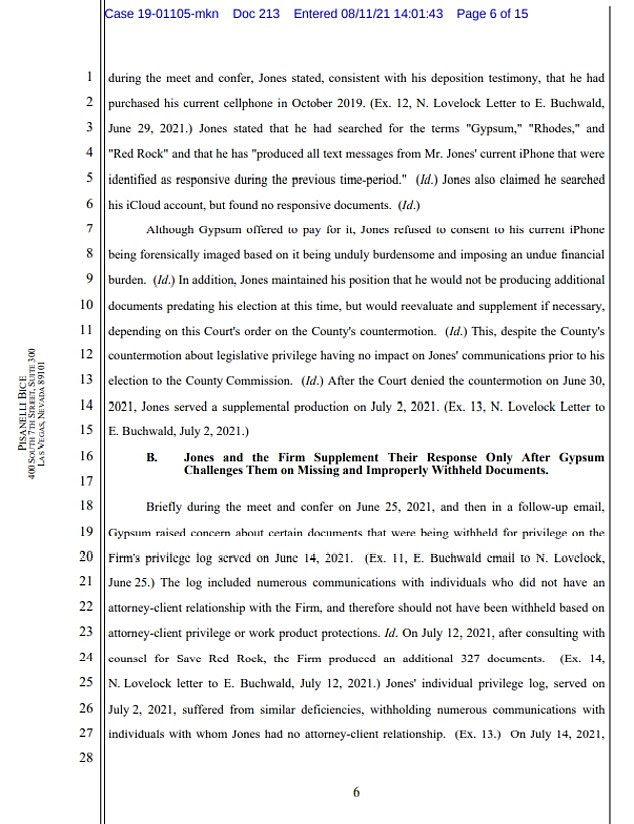 Rhodes is now suing Clark County and the board of commissioners for damages that, he claims, run to more than $1billion

According to the suit, ‘In addition to openly expressing personal animus against his “arch nemesis Jim the Sprawl Developer” Jones had even more personal interest in seeing Gypsum’s Major Project Application come to an end.

‘Jones served as counsel for Save Red Rock in litigation concerning the very same applications that Commissioner Jones eventually voted to reject. Indeed, Jones misled the Ethics Commission so he could vote against Gypsum’s waivers and applications.’ 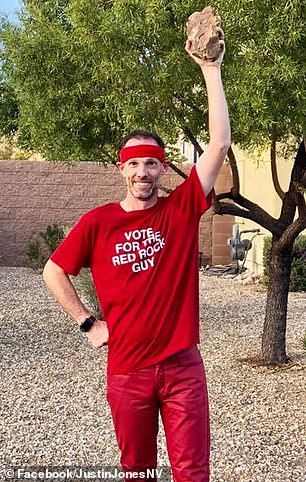 Rhodes’s lawyers point out Jones was so personally invested in his opposition to Rhodes that he posted a photo of himself on his Facebook page on October 31, 2018, dressed in his Halloween costume of ‘The Red Rock Guy.’

In fact, Rhodes’s lawyers point out, Jones was so personally invested in his opposition to Rhodes that he posted a photo of himself on his Facebook page on October 31, 2018, dressed in his Halloween costume of ‘The Red Rock Guy.’

The image attached as an exhibit in their complaint is accompanied by the caption, ‘I dressed as an alternative superhero The Red Rock Guy for Halloween!

‘My superpower is making compelling arguments for preservation and fending off my arch-nemesis, Jim the Sprawl Developer!’

In his taped deposition Jones repeatedly denied under oath ever using the word ‘arch nemesis’ in relation to Rhodes.

Now, lawyers for Rhodes, have accused Jones of destroying evidence in his bid to conceal his ‘crime.’

DailyMail.com has learned, they have called for the court to impose ‘significant financial sanctions’ on Jones and the county alleging that the commissioner destroyed incriminating texts and emails.

Their move comes after a Federal judge took the extraordinary step of ordering Jones to hand over his iPhone for forensic imaging after the commissioner failed to produce all relevant material for which he had been asked, including any pertinent communications he may have had with his wife, Megan Jones.

Megan worked for Harris in Nevada during her 2020 presidential campaign.

Megan, a Las Vegas native, has been married to Jones since 1996 and they have two children together.

But any texts the 26-years-married couple may have been exchanged regarding Jones’s maneuverings have long-since been deleted. 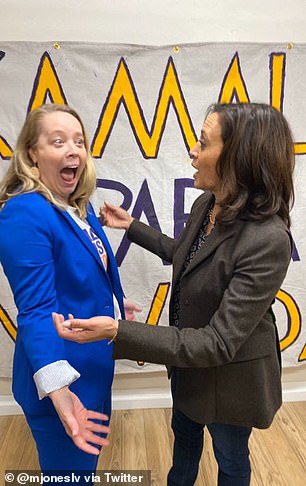 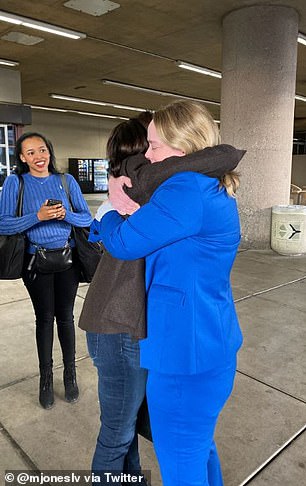 Megan worked for Harris in Nevada during her 2020 presidential campaign. The VP recently tapped Megan to bring her into her office as a special government employee ahead of November’s midterm elections 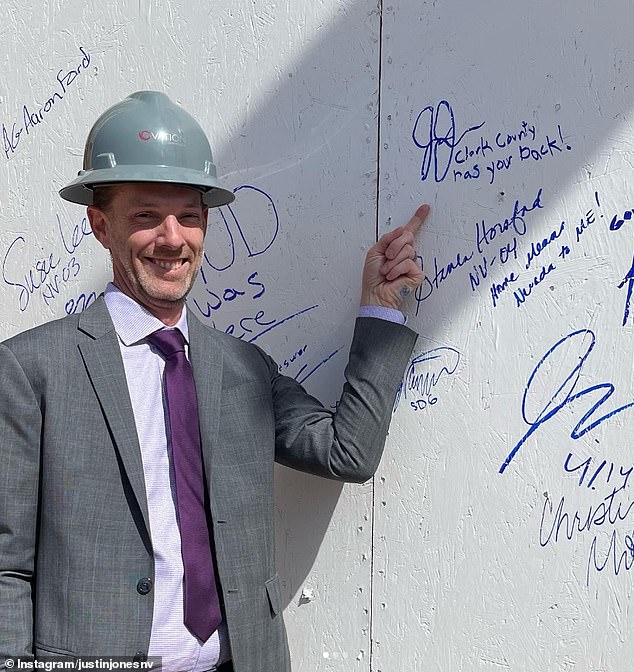 Jones is accused of trading his powerful public support for Sisolak, then commission chair and a Gubernatorial candidate, and promising to dismiss an ‘uncomfortable lawsuit’ being brought by ‘Save Red Rock,’ the conservationist group of which he was legal counsel 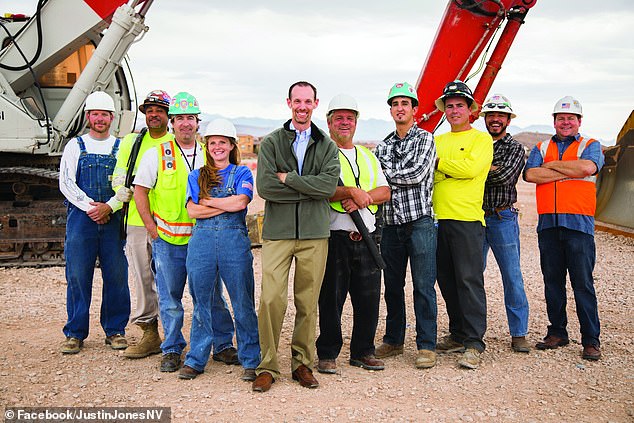 If Rhodes is successful, the settlement could wipe out the $1.5billion budget of the Nevada county which is home to Vegas and its world-famous Strip

The forensic examination of his phone showed that Jones deleted all his texts ‘en masse’ the day the commission voted on Gypsum’s application.

According to the motion, reviewed by DailyMail.com, ‘Jones and the county have multiplied these proceedings attempting to conceal the knowing destruction of evidence in this case.’

It added: ‘After months of delays, false representations, motion practice and hearings, the Bankruptcy Court finally ordered imaging of Jones’s cellular telephone and iCloud accounts, which has exposed another series of shameful and deceptive acts.’

The forensic image revealed that ‘Jones destroyed all text messages shortly after the public vote on Gypsum’s land use applications.’

Jones, the motion states, had a duty to preserve evidence. It states, ‘There can be no dispute that Jones had relevant text messages that were not preserved as required.

‘But Jones went far beyond that, actively deleting untold information in an effort to hide his unlawful scheme.’

Jones’s lack of transparency was exposed in the first place because not all the parties had done the same.

He had blind copied emails in which he made his illicit offer to Sisolak to Andy Maggi, head of the Nevada Conservation League. 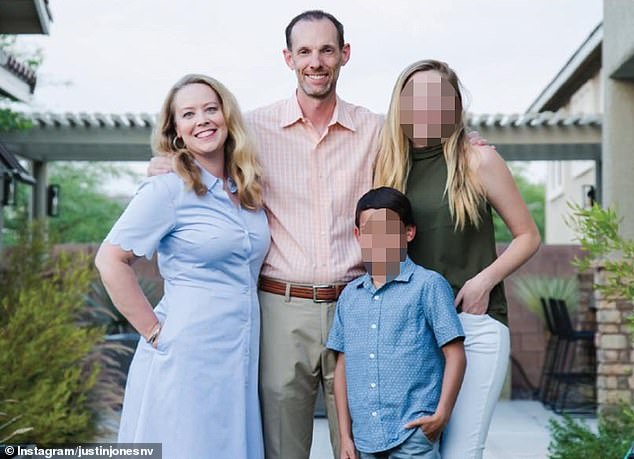 Megan, a Las Vegas native, has been married to Jones since 1996 and they have two children together

In those emails, obtained by Rhodes’s attorneys, ‘The offer was as simple as it was brazen: Jones would trade campaign support from the environmental groups and the dismissal [of an ‘uncomfortable’ lawsuit] for Sisolak’s immediate commitment to vote ‘no’ on Gypsum.’

In another communication to Maggi, Jones wrote, ‘Well, I’m doing my part. If Sisolak doesn’t want to play, then it’s going to blow up in his face.’

The suit states, ‘With this pressure…the deal had been completed, with Sisolak releasing a statement committing to vote against Gypsum’s applications.’

Sisolak, the county and Jones have denied the allegations against them and continue to claim that Rhodes failed to comply with various procedural requirements when it came to his Major Plan Application.

That, they assert, and not any ‘back-room deals’ is what killed his development.

The motion to impose sanctions for destruction of evidence will be heard in Federal  Court in Nevada on October 20.